The barn where the sheep live in winter. 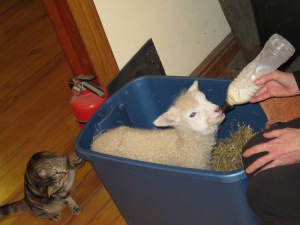 Our new kittens had a new playmate.

Last year we vowed we would not do this again. No more lambs in dead of winter. Lambing season is traditionally in spring, mostly because it is easier on the farmers. Rams are kept apart from ewes to delay rutting; some farmers don’t keep a ram at all but borrow one once a year for “service,” to use the ewephemism of the trade.* Last winter we gave away our ram and neutered all the ram lambs. Or so we thought.

The first lambs arrived on February 5: twin white ewe lambs. When I discovered them, one ewe, Ewelysses, was cleaning them and acting like they were her own, but it was another ewe who had the telltale afterbirth hanging down between her hindlegs. Ewelysses showed no sign whatsoever of having just delivered. Meanwhile, the other ewe, Eweripedes, stood back and stared at them in wide-eyed disbelief. I recalled that Ewelysses had done this before – an over- eager mother appropriating another ewe’s lamb – but that time she quickly went into labor and thus had a lamb of her own to care for. Ewelysses could clean up those lambs, and call- and- respond in loving devotion, but she had no milk to feed them. Somehow I would have to separate her from those lambs so that their true mom could nurse them, and soon. **

Maybe it was because of their confused start that Eweripedes was undecided about one of her twins. She did not exactly reject her – I have seen ewes fling their lambs against the wall, or trample them underhoof – but neither did she let her nurse. She would simply step aside whenever the lamb tried to drink with a little shuffle. We watched this dance for about three days and finally decided that this little lamb would be a bottle lamb. We named her Ewela.

More lambs arrived over the next few days – all twins – with temperatures plunging below zero at night and rarely climbing above single digits in the daytime. We found one lamb – a twin – half frozen on the ground, with a hoar frost over its black coat, its mouth blue and its body stiff as a dinner plate. We warmed her by the fire and fed her formula, and two hours later she was up on her feet and sucking on a bottle with a hearty appetite. We brought her back to her mother, who to our surprise welcomed her lamb back into the fold. That was one myth we believed to be unsinkable: no ewe will ever accept her lamb after it’s been fed formula. We bottle fed two more lambs in those first few hours and successfully returned them both to their mothers – and by doing so, we saved their lives.

Meanwhile, we brought Ewela inside the house at night, because it was so cold and for our own convenience. She slept in a box by the stove for almost two weeks – a record – sleeping quietly through the night and keeping to herself inside her box. When at last she became too rambunctious – jumping out of her box and calumphing around the house in the middle of the night– we knew it was time to return her full time to her family.

As soon as we turned Ewela out, we had other newborns in need of a warm box by the stove – for three weeks, we had a lamb sleeping inside the house, and when we no longer did, I would miss the sounds of knees knocking on the sides of the box, the rustling in the straw when they stirred, and the lamb’s cry, which begins like a floorboard creaking before becoming a full blown wail, loud enough to be heard clear across an open pasture.

The last ones arrived on a Sunday evening. Art came inside after feeding Ewela, and said, to my surprise, “There’s another lamb.” All the others had arrived in the morning.

“White, and she’s doing well. She’s on her feet and the ewe is being good.”

We decided to wait an hour before going out to check on them.

Later, I walked back to the barn in the moonlight, the snow creaking under my boots, and as I approached the barn I could hear the cry of a newborn. I shined a light toward the barn and could see a black lamb writhing on the ground. Another lamb. The ewe stood over it, licking it and grunting. The white one was standing beside them. I watched as the ewe moved back and forth between them, licking and nudging the new one, then turning away to attend to the other who needed to nurse.

It is a difficult life in the beginning. Especially when it is cold. A lamb has only so much time to get up on its feet and to figure it all out. Without milk, it cannot maintain its body heat and will soon go into decline. When it is very cold, that window is perilously short. A newborn will struggle to lift her head, and to manage those long gangly legs with their bulbous knees. She will attempt to swing herself over onto her knees, then to unfold her legs, hindlegs first. She will swivel and sway, toppling over a few times before she will get it right. Still sticky and wet, with the so-recent memory of her steamy hot bath inside the womb, she stands beside the ewe a bit dumbly, as some dim consciousness begins to stir deep inside of her that will tell her to turn toward her mother’s teat, hanging from its wooly firmament, as if to true north. The ewe will stand patiently as the lamb nudges in all the wrong places, turning her head around to smell her lamb’s little tail – and when the lamb at last discovers the secret of life, when she has mastered the gestures of nudging and pulling and sucking, and she drinks – then that little tail will tremble with happiness. And if there is a shepherd standing over them, she will know that all is well and as it should be.

The long cold spell did not end until all the ewes had delivered their lambs. Now we can see them all lounging around in the sunlight in front on the barn. They will play together, racing and jumping and climbing onto the backs of the monster ewes. The world is still an enormous snow bowl, that will so marvelously become – what the lambs have yet to discover – a miracle of grass and shade trees in the summer sun.

The world is still a snow bowl. View of Ewetopia Farm and the West Monitor Barn.

*Sorry, but I couldn’t resist that.

** I am grateful to our friend John Dodson who came to our aid at that moment (when Art was not around).

3 Responses to More Lambs in Winter